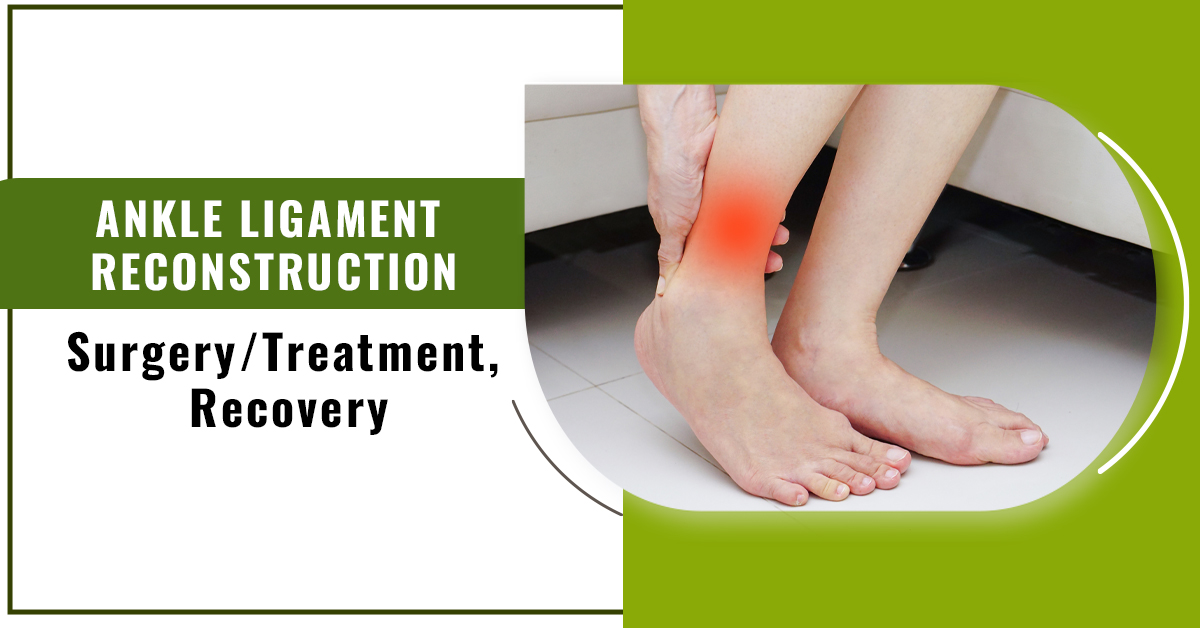 What is Ankle Ligament Reconstruction?

One of the most frequent sports-related injuries is an ankle sprain. You could have pain and a sense of instability in your ankle if the ligaments on the outside of your ankle are strained or torn. Surgery can be necessary if these symptoms don’t go away following non-surgical treatment.

Your doctor would probably advise ankle ligament reconstruction surgery if you have substantial ligament damage from an ankle sprain, overuse, or other condition. The most recent minimally invasive procedures are used by Penn orthopaedic surgeon to fix ligaments that have become loose or damaged as a result of trauma or misuse.

Arthroscopy is a minimally invasive surgical procedure that enables doctors to see within the joint’s structures. A tiny camera on a thin, flexible tube is inserted through a small skin incision during arthroscopic surgery to see the injured tissues. This method of seeing the injured ligaments enables us to assess the degree of injury and decide what kind of surgery is required.

The Brostrom-Gould procedure and tendon transfer are two methods for lateral ankle ligament restoration. A minor incision is made through the ankle for both of these procedures. Sutures are used in the Brostrom-Gould procedure to tighten ligaments. The weakening ligament is replaced with a tendon, either from another region of the body or a cadaver and held in place with sutures and hardware like screws and pins during a tendon transfer.
One or more ankle ligaments on the outside of your ankle can be tightened and firmed up through a procedure called lateral ankle ligament reconstruction. It is also referred to as the Brostrom method.

When non-surgical treatments, such as bracing or physical therapy, fail to stabilise an unstable ankle, surgery may be considered. Before surgery, non-surgical treatment for six months is frequently advised. In addition to performing a physical examination to determine whether the ankle is unstable, your foot and ankle orthopaedic surgeon may also request X-rays to aid in the diagnosis.

Your doctor will “grade” your sprain in to evaluate its severity:

If one or more of the ligaments on the outside of your ankle have become loose or strained, you might require this operation. A condition known as chronic ankle instability results from this. Chronic discomfort, frequent ankle sprains, and an ankle that frequently gives way when you walk or move about are all possible effects.

You may be more likely to develop an unstable ankle if you have certain mechanical issues with your foot, such as:

Along the outside of the ankle, a tiny cut is made, and the damaged lateral ligaments are examined. The ligament is cut and shortened if it has been strained but not ripped, and the two ends are then stitched together. The ends of a ruptured ligament that is still linked to the fibula bone are stitched together for healing.

The strip of tissue known as the extensor retinaculum, which crosses the front of the ankle joint, is used to strengthen the repair. It has a section that is pulled over the patch and stitched to the fibula. Additionally, this increases the ankle joint’s stability.

The wound is closed after the surgery with steri-strips placed on top of the skin and a dissolving suture. Until the edema has subsided, plaster splints are worn. A short-leg walking plaster cast is then put on for three to four weeks after a few days.

Every procedure carries some risk. ALR has the following:

Your age, the structure of your foot, and your general health all affect your risk for problems. Any worries you might have should be discussed with your healthcare professional. The hazards that concern you the most can be discussed.

Within the initial weeks:

How long it will take to recover?

A splint or cast should be worn for at least two weeks. For up to six weeks, you might have to avoid putting any weight on your ankle. Wearing a detachable walking boot, you are allowed to gradually place weight on your ankle. Following the boot, an athletic ankle brace is frequently used.

After six weeks, as soon as discomfort and swelling subside, ankle strengthening can start. This might entail receiving formal physical therapy. Running in a straight line is permitted when the ankle is capable of supporting it. Exercises tailored to a sport might then begin gradually. Six to twelve months are needed for the full recovery. For up to a year, it is advised that patients use a brace when participating in sports.